There is something about a 10 year old that just warms my heart. Particularly, if his name is Zachary! On New Year’s Eve I was invited to join Zach for his 10th birthday dinner at the restaurant of his choice – White Spot. He is definitely growing up! 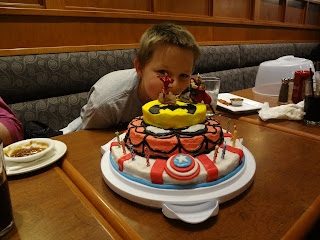 He had this wonderful home-made cake that just oozed love and care as it depicted three of his favourite movies – Avengers, Spiderman and Batman. So beautifully done and it tasted so darn good.

I have spent many glitzy New Year’s Eve evenings and yet this simple meal with Zach and his chosen “friends” (all adult) just warmed my heart. I was sad that I had to leave early to get on BlogTV that night.

As many of you know, I struggled with computer problems for about a week and last night I found an app that connected me to Samsung’s own help people – undoubtedly, based in some far off land. I was assigned to Expert #53. I told him my sad story… bought the top of the line Samsung, with more bells and whistles than you can imagine. It has a i7 processor and 1T of storage. Good stuff. Something was going wrong with it and it was not a virus. It had a major problem getting my Google pages to open and it was taking me up to 4 refreshes to get my BlogTV channel to load.

Expert #53 took control of my computer and I was happy. Sad that I hadn’t noticed the app before but happy that he/she took control of my computer and would have it fixed in a heartbeat. Then I saw it… “omg”. That didn’t bode well at all. He tweaked here and there and then told me to reboot. As the reboot happened I saw his words on the screen “omg… no!” Still not a hopeful sign. More and more tweaking, opening and shutting of apps and system files and then the request to reboot once again. I felt more confident. “omg…”

It took two hours before the “omg” was replaced with an exciting “hmmm”. Anything other than omg was exciting! I saw him go into the DOS screen (fond memories of when that was all we had) and do some other things that were beyond my pay-grade and understanding and then I was asked to reboot again. You can imagine my patience and frustration were changing places. Patience was dropping and frustration was rising. On the fourth reboot I saw him type “ah…” I had never considered that to be an inspirational term before but after all the “omg” and “hmmmm” I had seen the “ah…” suddenly seemed to propel me from near despair to elation.

Then he said “want to try it now?”. Just like that. I had switched so many screens, felt like an idiot when asked to open up screens in Windows 8 (that would have taken me a heartbeat in Windows 7). I didn’t even bother to try. I just asked him to get the relevant screen up for me. Sometimes, acting dim can be an asset!!

It worked. He had solved the problem. Suddenly, I had screens that were loading in swift order. Screens looked like they were meant to and all was good in my world again. I thanked him profusely and was grateful to know that free tech support for a year is part of the package on this super-doper laptop. Pity I didn’t “hear that” when I bought the thing. Oh, I was probably told, but sometime what I am told doesn’t necessarily stick in my brain.

It’s going to be a wonderful year. I can just feel it, can’t you?

Lesson learned: Windows 8 is a bear. Guaranteed to make you wish you had reloaded Windows 7. All the bells and whistles are useless when one component of your laptop decides to have a snit and you then do even more damage trying to correct the snit 🙂